5 Things Every Great Team Leader Does 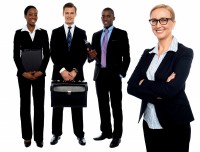 The ability to lead teams effectively pays off in almost any endeavor, but it’s particularly critical for innovation and change.

From a big picture point of view, think of a team not as a roster of individuals, but as a collection of skills and motivations, perhaps supported with some additional resources like money or equipment or consultants, and assembled to perform an assigned task. The team leader is responsible for orchestrating activities and assignments to create a higher quality and more timely output than the team members could have created working on their own. In short, the whole should be greater than the sum of its parts.

A less obvious corollary is:

What Great Teams and Team Leaders Do

To significantly increase the effectiveness of the team and the quality of the team output, team leaders and team members can do these simple things:

Prepare. Preparation is everything. Any confusion about what needs to be done and how it will get done dramatically reduces the effectiveness of any team. Tell the team what to expect and how to be prepared.

At a minimum, before every meeting with the team, the leader should share a detailed vision of how he or she plans to orchestrate the team to create an output that exceeds the expectations of the person or body in control. This vision entails far more than just sending out an agenda for the next meeting. And it should invite team members to comment on it and suggest improvements. Perhaps something along these lines: “I see us putting together an excellent proposal for XYZ by first _______, and next _______, while so-and-so solicits the help of ______ in order to give us a better perspective on the selection criteria. How would you propose improving on this initial plan?”

Refine. Experienced team leaders will conduct or facilitate, ahead of any actual meeting, conversations between groups of team members, often online, to narrow the range of alternative ideas or viewpoints that need to be discussed at the meeting. Basically, you want to resolve whatever is easy to agree upon ahead of time and leave the team meeting for final argument, tuning deliverables, or other things that require the team’s physical presence.

You’d be surprised by what can be decided, analyzed, and resolved using something like Googledocs. But don’t provide a blank spreadsheet and expect everyone to know what to do. Lay out and format spreadsheets into templates where it is clear how the debate or analysis will be conducted.

Understand. One of the first things a team should do is get to understand what each member wants and plans to contribute to the team and what each wants to get out of being on the team. A good leader will make sure everyone is being honest, getting beyond the clichés like “I just want to see the team succeed and I am just happy to be here; it should be challenging and exciting.” The truth is that everybody wants something out of the work they’ll be contributing and everybody has skills to contribute–surface those motivations and skills. Also identify any and all constraints for each member (e.g., “My other job responsibilities will allow me to devote only three or four hours a week to this effort.”) If someone doesn’t really want to be on the team or doesn’t want to contribute to the team then let that person go. There’s no need to bring down the quality of the team’s work in order to cater to any one person.

Test. Leaders and all team members will, at various times, want to collect ideas and test ideas to see which part of which idea they want to use in putting together the team’s deliverable. There are various techniques for collecting and testing ideas. Brainstorming as described by David Kelley in The Art of Innovation and analyzing ideas as described by Edward de Bono in The Six Hats are good places to start.

Judge. The team leader needs to propose the criteria to be used in judging and improving upon ideas. The team leader also needs to specify the process by which ideas will be judged. For example, using extreme examples or cases can quickly filter out good definitions from bad ones: “Does this definition of a leader apply to both Adolph Hitler and George Washington?” If so, then it’s probably a terrible definition and should be discarded.

Throughout this process be prepared for emotional debates and strong opinions. That’s what happens with teams of highly capable people. It’s what you want to happen. Many team leaders fail because they fear strong emotions and opinions. They choose complacent and uncommitted team members or they distort the team’s mission in order to avoid confrontation. Differences of opinion enhance the quality of the output and great team leaders know it.